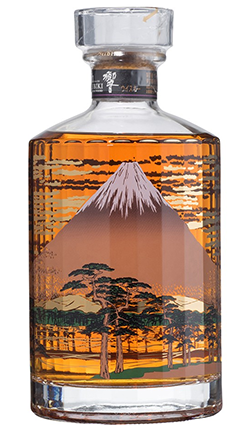 Released in 2015 to Commemorate Japan’s highest peak Mount Fuji being added to the UNESCO World Cultural Heritage List in 2013. Suntory released this special 2nd Limited Edition which followed on from the 1st release in 2012. The Hibiki whose bottle always has 24 facets representing the 24 seasons of the Japanese lunar calendar has been redecorated with a painting of a scenic view of Mount Fuji. With Japanese plum, pine and bamboo painted on its skirts, symbolizing happiness and good fortune.

Palate: Oak, dark cherry and sweet caramel notes, buttery with a wisp of smoke and some wood spice.

Finish: Long, with a hint of smoke.