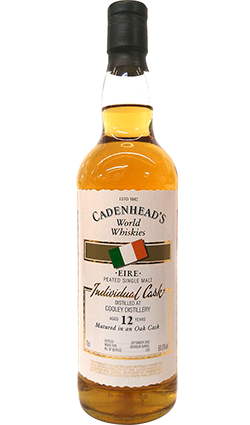 Cooley started distilling whiskey (both grain and malt whiskey) in copper pot stills in 1989, after having bought a distillery that produced vodka and other spirits in column stills. Since 1996, they have a peated brand named Connemara.

Cooley started distilling whiskey (both grain and malt whiskey) in copper pot stills in 1989, after having bought a distillery that produced vodka and other spirits in column stills. Since 1996, they have a peated brand named Connemara.

One of those first indie Connemaras… Imagine the surprise at the time.  I remember a lot of easy tricks have been played on punters at Feis Ile back in 2004. “Try this, what do you say? What is it?” “- A-r-d-b-e-g!” But of course… Too easy, too easy… A shame that they seem to have broken the mold.

Nose: A stonker of a nose: damp cellars, waxed canvas, peat smoke and brine. Great peatiness, with tar and lovely farmy notes (wet dogs, sheep stable – not unlike some Broras). My favourite kind of peat I would say. Slightly medicinal as well. Nicely integrated with young, sweeter notes (candy, yellow apple).Phew! With water: wet dogs (apologies, dogs), kilny smells, raw wool (yes it’s wooly), sour dough… All this is perfect. Mouth (neat): in-cre-di-ble. Extreme peat and lemon, a bit in the style of a blended malt that would have involved 80% of Supernova-style Ardbeg and 20% of the most citrusy Rosebank. Does that give you a proper idea of the stuff?

Palate: Explosion of oily notes, oats. Has balance,  A pure sweet centre. Smoke is like hot tar on a road.Powerful attack on citrus and peat. Grassy barley. Vanilla cream. Oak. Hints of caramel.

Finish: Long and unctuous. Chilli chocolate. Peat smoke and oranges ,and lemons and salt and oysters.

This is some bottling; great distillate matured to perfection in excellent casks. One for the Islay bore in your life.

Cooley is making good no-nonsense stuff. Complexity is not the major goal here, but the Irish peat is really unique and the end result has a lot of qualities.