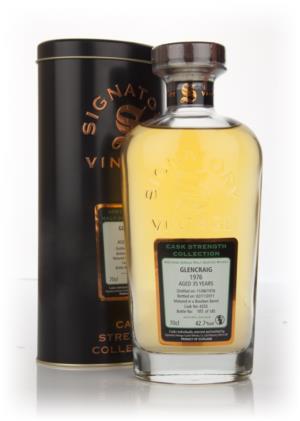 Glencraig was distilled at Glenburgie using their Lomond stills before they were removed in 1981 and production of Glencraig was ceased.

Glencraig was distilled at Glenburgie using their Lomond stills before they were removed in 1981 and production of Glencraig was ceased. The Lomond still was invented as an answer to the increased demand for Scotch whisky following the shortages of the war years. It had the bulbous shape of the traditional pot still but instead of an elegant lyne arm on top, it had a coffee can shaped top with three rectifying plates. The idea was that it was easier to assemble and the finished product would be more rounded and less oily than malt whisky tends to be.

Palate: Spicy and rich, notes of boiled sweets, creamy toffee and manuka honey. A tinge of cinnamon and allspice.

Finish: Oaky and tangy, with a little spice on the tail.

Overall: So many flavours from cola bottles through to manuka honey in a wonderfully rounded whisky. It is a terrible shame that the Lomond stills at Glenburgie were closed.