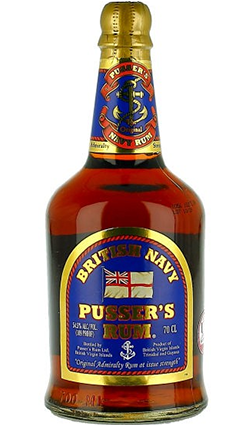 Today’s Pusser’s Rum, known as “the single malt of rum”.

Today’s Pusser’s Rum, known as “the single malt of rum”.

Modelled on the Old British Navy ‘Pusser’s Rum’. A big, strong Rum with oaky aromas leading to smokiness and subtle sweetness. Rum rations were given to sailors in the British Navy for over 300 years until 1970.

British Navy Pusser’s Rum is the same Admiralty blend of five West Indian rums as issued on board British warships, and it is with the Admiralty’s blessing and approval that Pusser’s is now available to the consumer.

Pusser’s uses no flavoring agents. It is 100% natural. In 2001, Pusser’s was awarded the “Gold Medal – World’s Premier Dark Rum” at the International Wine & Spirits Festival. In 2003, Pusser’s Rum won a “Double Gold Medal” at the San Francisco World Spirits Competition and a Gold Medal at the same festival in 2005.