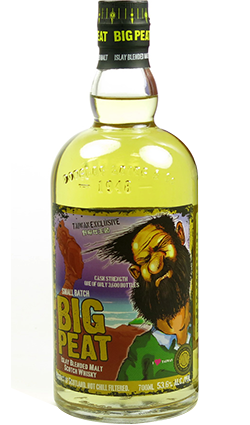 Douglas Laing’s Big Peat is a Blended (as we have to call them now) Islay malt containing spirit from Ardbeg, Caol Ila, Bowmore and, shockingly, Port Ellen.

Only 1 left in stock

PHOTO ON WEBSITE NOT THE SAME AS ACTUAL PRODUCT TAIWAN EXCLUSIVE

Douglas Laing’s Big Peat is a Blended (as we have to call them now) Islay malt containing spirit from Ardbeg, Caol Ila, Bowmore and, shockingly, Port Ellen. Not as full-on as the name might suggest, but with pedigree like that at this price Big Peat is a nailed-on winner. Picked up the top prize in its category at the World Whisky Awards 2010.

The Big Peat Small Batch Islay Scotch Whisky is a vatting (or blending) of single malt whiskies that hail exclusively from the island of Islay. Produced by Douglas Laing — one of the most prominent independent bottlers in Scotland — each small-batch of The Big Peat is a blend of whiskies distilled at Ardbeg, Bowmore, Caol Ila and Port Ellen Distilleries (together with a couple of whiskies from other distilleries that remain classified).


Recommended in Ian Buxton’s 101 Whiskies to Try Before You Die. In addition, it earned a score of 96 points from the Ultimate Spirits Challenge in 2014, which named it the “Best Blended Malt Scotch Whisky” in the world.

Nose: Thick, crumbly oatcakes with a bit of brie. Ice cream and jelly. Pencils. Big notes of earth, with medicinal notes coming through after a minute or two. Ham – plenty of ham.

Palate: Bonfire embers, light struck matches and sea breeze. The oatcakes are back, but this time they’ve been loaded up with fruit chutney and served alongside some blackberries. A drop of water opens up salty notes.

Finish: It just goes and goes, this one. Smoke and earth all the way to the end.

Overall: Wouldn’t mind finding this as a Gift in the Mail. Fantastic Whisky!