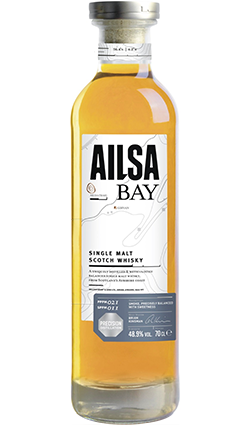 It’s heartening to see a Scotch single malt whisky pushing boundaries like this, especially at a time when capacities have been pushed to the limit. It’s a testament to the ideology behind William Grant & Sons that when they commissioned the building of Ailsa Bay in 2007, innovation was at the forefront of their minds. Everything from the variations on distillation, attention to the new spirit and original maturation processes wouldn’t have been possible if not thought through a long time in advance. These elements come together in Ailsa Bay to create a thoroughly modern single malt full of originality.

Tucked away within the Girvan Grain Whisky Complex, single malt distilleries don’t come much more reclusive than Ailsa Bay. Built to supply malt whisky for William Grant’s blends, there was a feeling that we might never see it released as a single malt whisky.

Once a year it even boots all the conventions you’d expect from a Lowland whisky out the window to create a sweetly peated malt, and to everyone’s surprise, the first commercial bottling of Ailsa Bay takes this form.

Nose: Custard and some phenolic ash, some Big Red too, becoming more chalky and cereal driven with subtle golden syrup. As the producer’s notes state, bacon then emerges.

Overall: The Big Red (spicy cinnamon sweets) are an ever-present but never threaten to dominate this sweet peaty treat.